Stein, as a noob, had many friends and had seen uniformed State Soldiers often. They always almost had a hypnotic effect on him. He wanted to be among them, and be "Great" like them. So one day, Stein came across a rally and contacted Major Falcon, and was recruited to the SSF. Following this he adopted the Graal Military lifestyle and served with mindless obedience. Not long after he joined, the conflicts with Xeno and The Riders of Rohan began, which is where he laid the foundation for all this future skills and wisdom. At this time, Stein became recognized as an excellent soldier, jumping up the ranks from Private, to Sergeant, to Lieutenant. After Auel quit, against his better judgement, Stein joined The Order of The Black Knights, Xeno's new guild. It was then when he realized that Xeno wasn't the cold-blooded rebel Auel made him out to be, and he began to harbor a distrust for Auel, the leader he once idolized. Not long after joining The Order, he left because "Xeno is a terrible leader", and after a short time, when Morzan returned to recreate the State, he joined back and received the rank Sergeant First Class. It was at this time Stein joined the Consilim Family. Later, after Sherlock destroyed the State, Stein joined Alteria, Vulnus' military, and received the rank of Guard. During Alteria, Stein was chosen by Gorgo to receive extra, private training to become one of the next generation of officers. Soon after the fall of Alteria, Stein joined The Inventory, Gorgo's Retirement Guild. He later came out of retirement to join Octavian in Aurelium. There he had the rank Operator, only to later leave for Atlantia where he became a Major, until The Vulnus Reform when he was demoted to Captain. Stein, during Atlantia, launched Operation Persuasion, an operation designed to keep people from defecting, proving his intelligence to his superiors. Stein joined the Nation with his peers when Atlantia was given to Auel, and he later retired again to The New Inventory. The New Inventory later turned into Adventurer, an guild lead by Gorgo for the sole purpose of exploring offmap. Approximately 6 expeditions were conducted before Gorgo accepted Auel's offer to join Neo State and transform Adventurer into State Transit Authority, a guild for transporting the public off map. At this time, Stein became a Lieutenant, and later a Captain. When Auel returned to take the place of Clovis, Stein joined The Brotherhood of Exile and quickly became a nobody.

Shortly after Gorgo was banned for starting a huge anti-admin riot and harassing Xor, Stein disappeared. I'm here to shed some light on what really happened here.

Stein is very loyal to Gorgo. Where Gorgo is, Stein is. It's been like that since he met her. After a month of being banned, Gorgo texted Stein, and asked him to get banned so they could make new accounts together. He got himself banned by yelling "I HOPE THE NAZIS KILL YOU ALL, JEWS" in Graal City. After this, they made two accounts. Everett Willowwind (Stein) and Alver Willowwind (Gorgo). They founded The Highland Bandits, a guild originally made to, quote, "Fuck up all the militaries with trained elite noobs" until Gorgo decided that she did not want to lead, and turned The Highland Bandits into Energy, a social/spar/chill guild. Gorgo and Stein's bond increased immensely during this time, as they were mostly alone and practiced sparring skills together, as well as Gorgo giving Stein "history lessons" about her time long before Stein even knew of Graal, such as her time in the original Graal Classic server.

They changed their names to Everett W. Nixon and Alver W. Nixon after they began to express their interest in former US president Richard M. Nixon. At this time, Gorgo also reawakened her passion for GFX by creating a Richard Nixon shield, later making a burger shield, a coffee shield, a duck shield, and shields of several more US presidents.

Later, Everett joined The State, followed by Alver who changed her name to Gorgus. Later, though, after a round of Graal Blackjack, Gorgus disappeared for a while, later telling Stein that she had decided to move to Zone. Stein got Zone too, and together they made Star Command, and had some success within the Zone world.

Stein would later come to quit the game entirely. 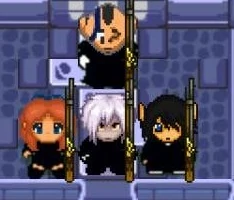 Stein is very kind, and a (sometimes painstakingly) honest person. Although he may sometimes seem foolish, Stein can be serious at times, and very intelligent. Stein has also always been a very happy person, being able to find a bright side to every situation. He has never been hostile towards anyone, preferring instead to find a diplomatic and reasonable approach to every situation, making him a major asset in militaries.

Retrieved from "https://wiki.graalmilitary.com/w/index.php?title=Stein_C._Allanach&oldid=9917"
Categories:
Cookies help us deliver our services. By using our services, you agree to our use of cookies.